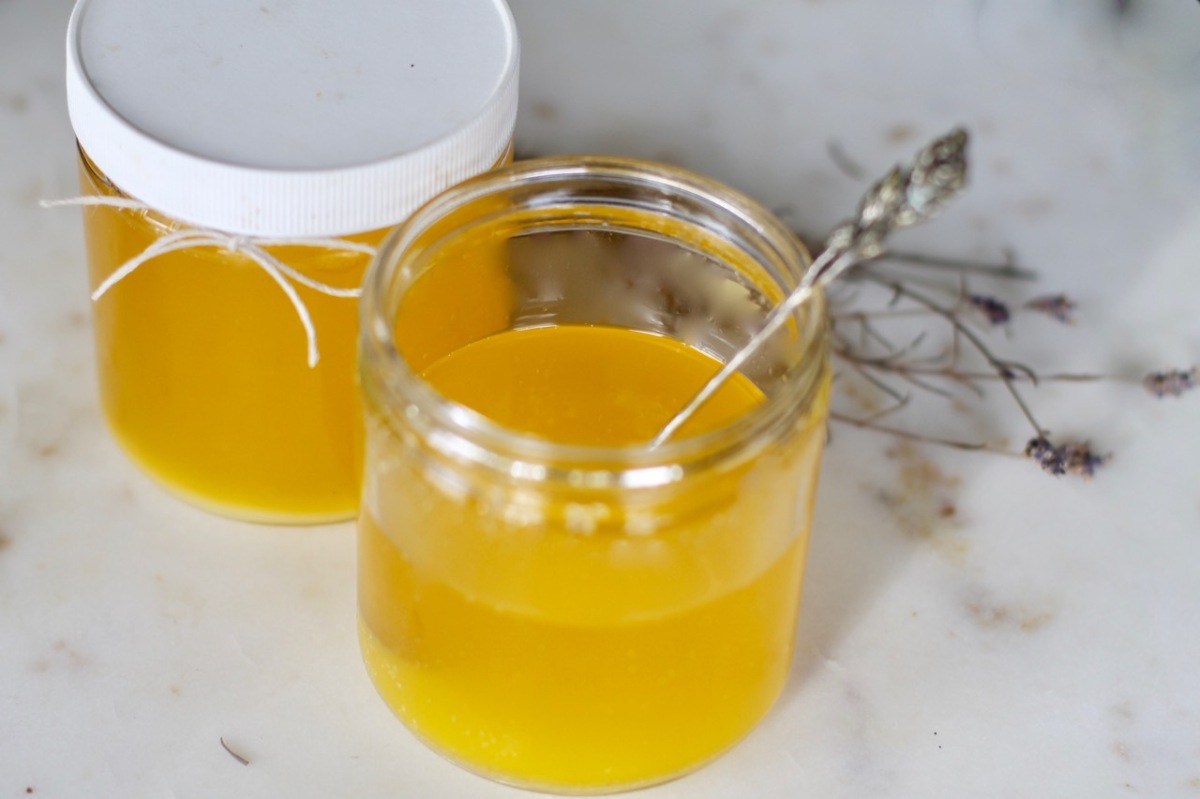 Every time I make ghee I wonder how it was invented. Perhaps someone left some butter cooking on the stove by mistake … Ghee is not so well known in our culture but is widely used in many countries especially in India. It is called drawn oil in English and is served with steamed lobster and crabs in the United States. Chefs like to use it because it has a high boiling point so it does not burn easily. In fact, ghee is one the best cooking oils. In addition to its conveniences, people in India use it for its numerous health benefits and is considered to be a sacred food.

What is ghee? Ghee is basically butter with the milk solids removed resulting in clarified butter. It is made by gently boiling butter and removing the separated milk solids that are formed during the process. Ayurveda, the ancient Vedic Natural Medicine of India, believes that the milk solids are toxic and should be discarded. In the absence of the milk solids, butter is more suitable for cooking at higher temperatures and is better for health.

So why should one make ghee? One, it is cheeper. If you make it yourself, it is half the cost of the store bought ones or might be even less. Also, I like to know what is in my ghee. The store bought ones are definitely lesser quality even when you buy the organic ones. When you make your own, you have control over what butter is used. After all, ghee is all about being a healthy alternative to butter. And it is easy to make for sure. I just cook it on one of the back burners during breakfast or while I’m making dinner.

What do you need to make ghee? You will need a pot with a heavy bottom to make sure that it does not burn. In addition, you will need a strainer and a cheese cloth that will help you get the unwanted protein out of the mixture. I personally don’t use the cheese cloth. I carefully pour the liquid through the strainer a couple of times and the results are fine. I just make sure all the solids are removed. It is not the official way but I don’t use cheese cloth very often. You will also need jars to store ghee. 1 lb of butter yields 1/2 quart of ghee. Try to use a jar with a wider mouth that is not too deep.

How can you use ghee? Of course, you can use it with Indian dishes as they generally use ghee. It can also be used any time when the recipe calls for butter. You can use it for baking pancakes if you are like me and prefer your pancakes to have that nice buttery flavor and you don’t have to worry about burning the butter. In addition, as I have mentioned before, it is used as a dipping sauce for steamed lobster and crabs. Feel free to experiment and include it in your cooking any time.

So let’s look at all those claims, I’ll try not to be too long. Ghee is considered to be a big health remedy in Natural Medicine. In Ayurveda, it is considered to be pitta and vatta pacifying which means it is good for hot conditions like inflammation and also dryness when nourishment is needed in the body. It is great for the entire body from the joints, tissues, digestion to the nervous system and many more. It is especially a great remedy for longevity.

It is great for digestion. The big issue with fats is that they slow down digestion. Well, ghee actually helps this process as it increases the digestive fire and enhances absorption and assimilation so it can even be used by kapha type people. Kapha type people are individuals whose digestion tend to slow down by oils and tend to gain weight easily. These people are advised to use ghee as an oil in moderation -of course. It keeps the gastrointestinal tracts healthy, thereby helping digestion. Also, people with dairy allergy can often tolerate ghee without problems.