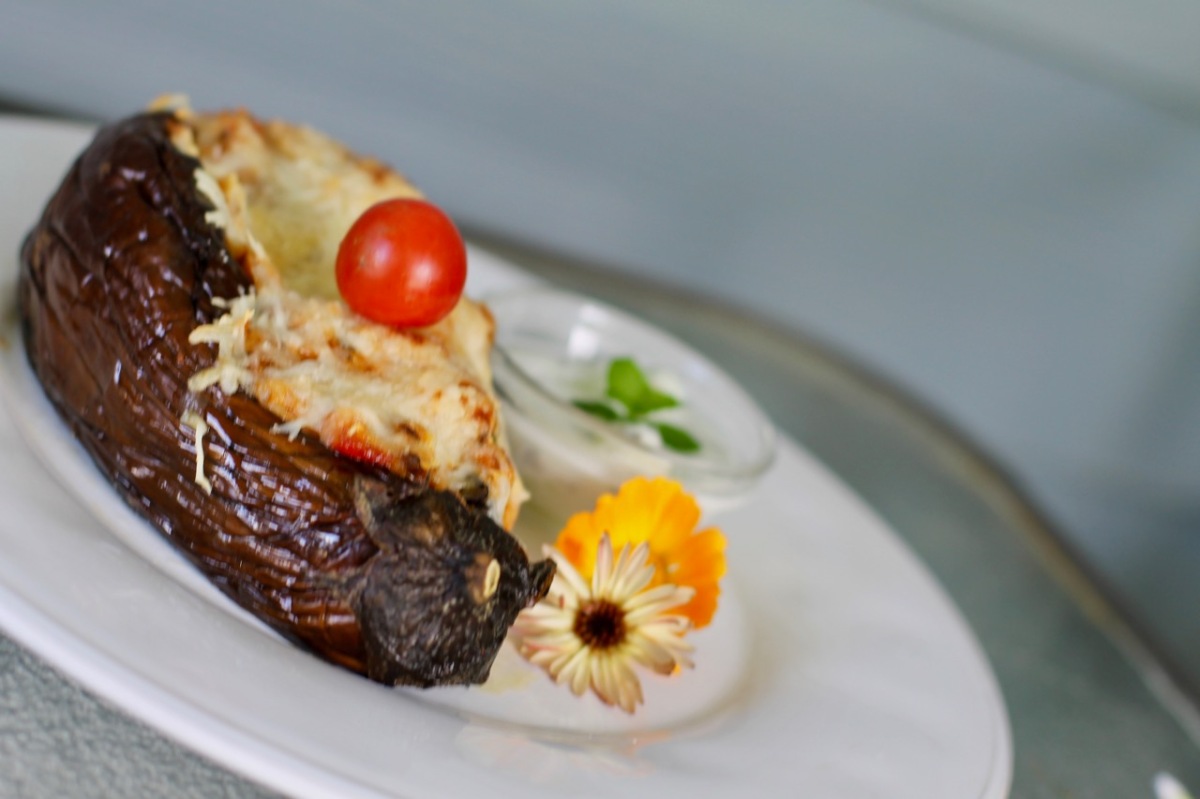 This is the vegetarian version of my previous recipe, the Turkish stuffed eggplants (karni yarik). I tried to keep the recipe’s Turkish authenticity but otherwise it is my creation. I replaced the meat with lentils, eggs and cheese and used oregano in the place of mint. I also used more tomatoes to keep the mixture moist. All these ingredients are used in Turkey and hope you will like it as much as I did.

I can’t help but notice the abundance of goods at the farmers’ market. The tables are filled with all kinds of fruits and vegetables. In fact, it is the time of the year when they have the most varieties available. For today’s post I picked eggplant.

We associate eggplants with the Middle East but it actually originated from India and has also been popular in other Asian countries for a long time. Today, it is used all over the world.  In Europe, it was a staple until potatoes arrived from the New World. The Turkish have certainly created many recipes with it and believe that they have the best eggplant dishes. The Spanards had brought it over to the Americas in the 1600′. Eggplants have been used in the United States; however, earlier, people didn’t really know what to do with them. Many just used them for decorations only.

Eggplants come in all kinds of shapes and colors. Shapes can be round or more elongated and the colors can vary from white, green to purple.  In the United States, the rounder, purple, more oblong eggplant is usually available in stores. For this recipe, try to buy these medium sized, fat, purple eggplants that I have pictures of. Also, make sure they are about the same size because different sizes will vary their cooking times. Also they should be nice and firm.

Eggplants belong to the night shade family along with tomatoes and potatoes. It is a cooling bitter plant that is highly nutritious with vitamins A, B, C, K1, E and minerals manganese, magnesium, copper, potassium, calcium, iron, phosphorus, and zinc. An interesting fact is that we often believe that it is a vegetable but in fact it is a fruit. Also, it is thought to be aphrodisiac.

In addition to its nutritional values, people have been using eggplants for other health benefits too. Asians like to use them for their cooling property. It is good for digestion, particularly for stagnation and heat. It is beneficial in clearing heat that accumulates during the warmer months but it is still a valuable plant now, during the Indian summer as it can take out heat that may have been trapped in during the summer. In addition, its antioxidants can protect the liver from toxins.

It is also associated with fertility from its ability to unblock stagnation in the liver and the womb. In China, brides were supposed to posses 12 eggplant recipes before they got married. By the same token, pregnant women are advised to limit the consumption of eggplants because of the possibility of miscarriage.

Text, recipe and photo by twincitiesherbs.com.